In the year 1969, Pierre Elliot Trudeau was the Prime Minister, a new generation gathered at Woodstock, the first human walked on the moon, and golf came to High Level!

That’s right! In April of that year High Level’s golf club was formed. Eric Evans was the first President, along with Lloyd Swensen as VP and Tom Diemert as Secretary/Treasurer.

Much of that summer was spent preparing the golf course for use. The task was a community effort in the tiny frontier town and in August the dream of a golf course was realized.

According to a report in the community newsletter, Northern Echo: “Many of the golfers expressed their amazement about the quality of the course, which they considered as ‘terrific for High Level’.” 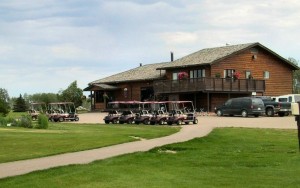 In June of 1970 the first Midnight Open was held where golfers actually played at midnight. Although the name stuck with the event, the midnight play didn’t last more than a year or two. The Open was first covered in The Echo in 1973 and was a 27 hole medal play event. According to an advertisement the 4th annual Midnight Open had an entry fee of $12.00 for men, $10.00 for ladies and $7.00 for juniors.

The Midnight Open later evolved to a 36 hole event.

The club officially became High Level Golf & Country Club in 1977 when it was registered as a Society with the government of Alberta.

The members had a vision to expand the course and work began in 2004 with mapping and clearing trees. The 18-hole layout opened in September of 2007. If you look at Fox Haven on Google Earth, you can see the course under construction (image from 2004). Explore using this Google Earth kmz file or Google Maps.

Years of hard work and amazing community support has brought us to this point in our story. Without the hard work of volunteers, dedication of staff and management, and some really great luck with northern weather, we may not have made it this far. But here we are. We are fortunate to have the financial assistance of our sponsors and advertisers and we are grateful for the funding we’ve received from the Community Spirit Grant ($2991.00 in 2013) and the Municipal Regional Tourism Association Grant ($8000.00 in 2013). These programs are supposed to help community projects like ours, and they certainly do!

Today, Fox Haven Golf and Country Club is a fun and challenging course that will test your game and wow you with it’s beauty.   The membership has worked hard over the years to help get the course into great shape and the dedicated grounds crew keep her in awesome condition.  Bring your “A” game, bring your friends and enjoy a great day of golf and fun at our little piece of heaven!